The highly anticipated Penguin refresh that Google says will allow the algorithm to run in real time is still months away, according to Gary Iles of the Google Webmaster Trends Analyst Team.

Reports of a Panda data refresh first became known early in June. Webmasters that have been hit by the latest update of the algorithm have since been eagerly waiting for the day to see whether any of the changes they made had any effect on their rankings.

There were even reports that drastic fluctuations in SERP results that occurred during the third week of June was a result of Google experimenting with the new Panda algorithm. Google representatives quickly shot down all such theories, and this latest announcement reinforces that the search engine is still some time away from making Panda run in real time.

The latest Panda update was on October 17 of last year, and the scenario that webmasters will have to wait until Halloween or longer to see changes on their affected sites is becoming more likely.

One feature Google did announce would be immediately available is that the desktop and mobile versions of Google maps would be able to sync with each other. 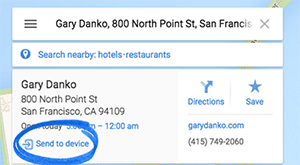 The feature will allow the desktop version of Google Maps to send a location to any mobile device that has the Google Maps app through a prompt at the bottom of the box. The feature is available on both iPhone and Android versions of the app.

Users, however, can only sync their devices if both have the latest versions of the tool, are signed in to the same account, have a reliable Wi Fi connection, and have enabled notifications. This will allow users to access to their favorite locations, such as hotels and restaurants.

Another announcement regarding Google Maps is a returning feature – mapmaker. The search engine had to shut down this feature after a series of map vandalism marred the service, but is entering a phased reopening beginning next month.

This time, Google is looking to the community for the moderation of the maps, as users will have more influence in editing the maps. Some edits will, however, still need to undergo moderation by Google operators. This is in response to community requests asking to give local editors more control and autonomy over the maps.