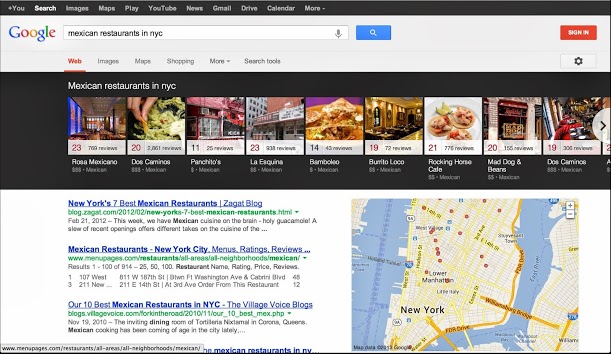 Local Carousel Results is the biggest change to Google’s local search in a long while. The “carousel” listings contain the businesses’ names, ratings, pricing summary, establishment type, and images of the establishments. Right now, this new feature is only rolling out in English in the U.S., but it will be rolled out to other countries and in other languages soon.

How big of an impact will Google’s Local Carousel have on local search? Let’s have a look at the facts and at the results of studies conducted on Carousel.

Made for the Visual Search Engine User

According to the participants who liked Local Carousel, because the new feature gave them visual representation, it made their search process easier. This is because they instantly get an idea of what they will be getting if they go to a specific establishment through the photos. Those who wanted improvements cited they would trust Carousel results more if the reviews were from Zagat or Yelp.

The study on LocalU.org further proves the effectiveness of Carousel by showing where the users click on the new local SERPs page the most. This time, 83 users participated in the study. 48% (40 out of 83) of clicks on the page were on Local Carousel, while the map only received 14.5% (12 out of 83) of clicks from users.

The earlier and later studies had similar results. In both studies, the third and eighth listings on the Carousel received the highest clicks. Those who chose these listings said two things affected their choice: the rating of each establishment, and the images used on the Carousel results.

The main takeaways from this study are the following:

1.Optimizing reviews and ratings is very important in getting more clicks on Local Carousel. Although their source of ratings is still unclear, they are already showing ratings on the carousel results.

2.Reputation management is important in ensuring local SEO success. Aside from the reviews displayed on the initial carousel results, once a user clicks on a listing, all related pages to that listing appear on the SERPs below. It’s important to ensure that what users find underneath that carousel listing is good.

3.Optimizing business images is necessary for Local Carousel. Google does not let you choose the main image for Carousel yet. However, it won’t hurt to use the right tags and metadata to define your image to increase the chances of that image being chosen for your keyword. Choosing high-quality images also help to attract the attention of users regardless of which image Google chooses to display.

Talk to your account manager today if you need help optimizing your clients’ listings for Local Carousel. Sign up for free and become a search engine optimization reseller to get started. Keep checking back for more updates on SEO!