In a bid to reach out to more users interested in the various aspects of search marketing, Google announced the renaming of Webmaster Tools to Google Search Console.

For almost 10 years, the traditional idea of the “webmaster” reflected only to some users, Google Search Console product manager Michael Fink explains. With the rebranding, the company hopes the product will cater to all kinds of Webmaster Tools fans. Google said this includes “hobbyists, small business owners, SEO experts, marketers, programmers, designers, app developers, and, of course, webmasters as well.”

“It’s had an awesome run, the teams have brought it a long way over the years,” said Mueller. With the growing number of GWT fans, however, they feel it’s time to rebrand the product to include everyone who uses it.

The updated branding will roll out over the coming weeks. Except for the name, nothing else has changed, although Google is frequently adding new features to the tool, with the Search Analytics report being one of the newest additions.

After a lot of questions, follow-ups, and talk in forums, Google finally confirmed a few changes have been made on their core ranking algorithm.

In a report published on Search Engine Land, the search company said that while there are no updates related to spam, there were some changes to “the core ranking algorithm in terms of how it processes quality signals.” Google provided no other details, but it shows they will be stricter when it comes to the quality of content in websites.

Tweets are now live on Google search results, marking the official partnership between Google and Twitter.

“Starting today (May 20), U.S. users searching in English will see relevant Tweets in their search results within the Google app (iOS and Android) and mobile web,” the microblogging site said in an announcement. SERPs will now show tweets indexed in real-time.

In a separate announcement, Google explained the process further: “Whether you’re interested in the latest from Taylor Swift, news about the #MadMenFinale, or updates on the NBA playoffs, you’ll have access to it directly from Google.”

“Let’s use NASA as an example—just ask the Google app about “NASA Twitter,” and in the search results, you’ll see Tweets from @NASA:” 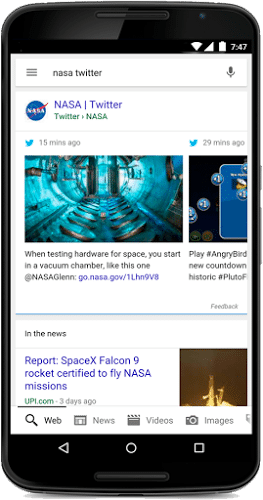 The desktop web version will roll out soon and the new feature will come to more countries in the coming months.

This is a great way to get real time information about current events. It’s also another way for individuals, businesses, and organizations on Twitter to reach a global audience at the most relevant moments.

Keep checking back to stay updated on the latest in the industry.