Is Google Rolling Out Multi-Week Updates?

Late last June and earlier this month, we’ve observed increased general online activity and ranking movement. Google’s Matt Cutts confirmed in a tweet that they were rolling out a multi-week update at that exact period. In an analysis released yesterday on their blog, Moz studied the increased activity from this multi-week update to try to answer the question: Are we going to see more of these prolonged updates in the future?

SERPs Activity at an All-Time High

Although Cutts confirmed that a multi-week update was happening, he did not note when it exactly began, or when exactly it will end. He just gave a rough estimate, which you can easily cross-reference to the activity tracking tools like MozCast, SERPmetrics and SERPs.com picked up at the time. Comparing the data from these tracking systems, we can estimate the update to have taken place from before Cutts tweeted his confirmation, all the way to the Independence Day weekend.

This graph from MozCast shows the increased activity during that period, with the activity peaking at 120 degrees – the highest detected by MozCast of all time. The activity for this month (the bars to the right) is included as a point of comparison: 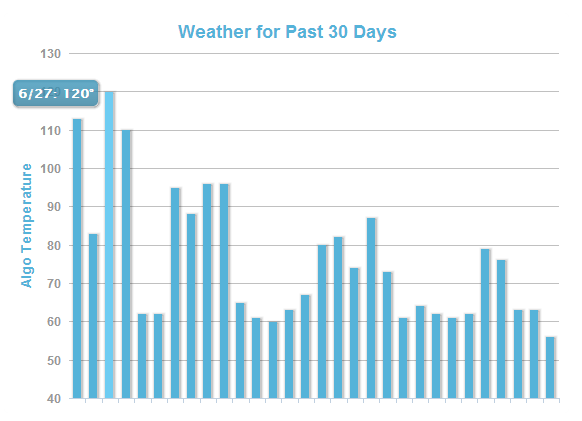 SERPs.com volatility tracking. Note the flux from June 26 – July 4, and how much lower and much more stable the activity becomes afterwards

SERPmetrics flux data. Note how the activity becomes volatile starting June 24, and does not begin to stabilize until July 7

The analysis also showed how this first confirmed multi-week update affected partial-match domains, exact-match domains, and what MozCast calls the “Big 10 Domains” – the top 10 domains with the most page-one ranking subdomains. The study shows that PMDs and EMDs both experienced a temporary influence decline, with PMDs displaying a sharper slide than EMDs. They regained influence after the Independence Day weekend, which is now believed to be the end of the multi-week update.

If you change the data coverage from 30 to 60 or even 90 days, you will see that the movement of these two is generally downward, but they took a much lower dip than the usual during the multi-week update. They recovered afterwards, only experiencing slightly heightened movement again when the 10-day Panda update started rolling out in mid-July.

No Official Word from Google

Apart from Cutts’ early confirmation of a multi-week update, they did not explain what exactly caused the record-breaking fluctuations that took place over the three weeks they rolled out their update. The analysis Moz released stated that it’s possible Google tested some updates, kept a few of them, and rolled back others.

Based on the graphs above, you will notice that the SERPs volatility and temperature only slightly moved when the Panda 10-day update was rolled out just the other week. However, since Google has not announced and explained any major updates after the “payday loan” update, we can only guess what exactly happened during the multi-week update. The most likely picture is one that Google frequently says – that they were refining their updates. These refinements may have caused the fluctuations we’ve seen in the past month.

Although there is no official announcement from Google on whether they will be doing multi-week roll outs in the future, it’s best to be prepared. What we’ve observed from our own campaigns is that we weren’t hit as hard as the rest of the people reporting ranking changes. Our campaign rankings were consistent throughout the multi-week update.

What we’ve done prior to that period is the following:

Our SEO methodology can help you bounce back from the multi-week update and the 10-day Panda roll out, and it prepares your campaigns for possible multi-week updates in the future. Contact your account manager or sign up for free to get started. Keep checking back for more updates!